1
View cart “Celtic Brass Colonial Shoe buckle” has been added to your cart. 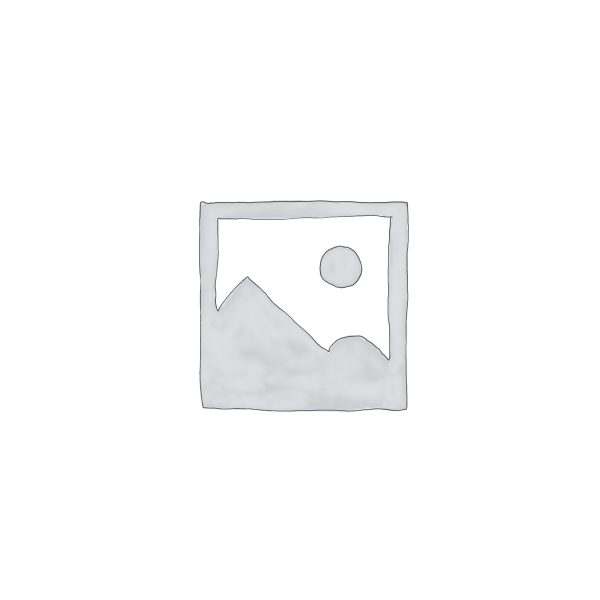 Military #3, White Bronze, has a broader face to the buckle that would be correct for the later part of the 18th Century.  A  medium-plain face white bronze buckle that will still fit a 1¼” latchet.  Nice for the soldier or townsman.  The price is $35.20 per pairs.

What buckles should use? Since we carry so many styles it does get confusing. This is still a matter of personal choice as the design of which style reflects not only the persona that you are portraying but you own style too.
To help we will to break them down into general groups.

The Military would tend to wear a plain faced buckle. The earlier the smaller the buckle would be, like the Military #1: brass was common but there were silver colored metals used as well. Pewter, Pinchpenny, Nickel (white bronze) and Sliver. Then toward the mid-century the large and wider faces would be in favor. Military #3 , Military #4. Brass and Iron Oval and The Pewter Midshipmen would also be a choice here for the brass color or silver color buckles. 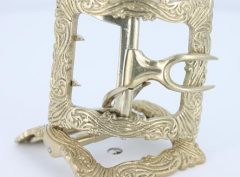 Swirl shoe buckles in white bronze, a fancy buckle! But with the addition of gemstones, it will really pop, I have made a belt buckle out of the swirl buckles too. Well cast brass and the unique design give way … Read More 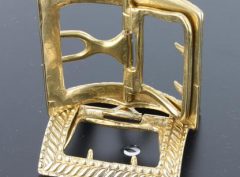 Rope Buckle in Brass: A Gentlemen’s buckle. It states a certain class in dress. 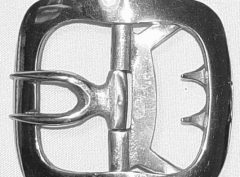 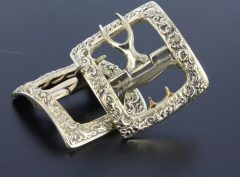 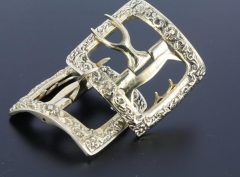 Tudor style Colonial Brass Shoe Buckle gives a flair to your impression. The floral effect is a reflection of the time and your station in life.  The buckle is sold separately but will not incur additional postage if purchased with the shoes.  It will fit our 1 1/4″ latchets.

Reflecting the design of a ribbon, this Buckle is suitable for Ladies. Price is $35.20 per pair. 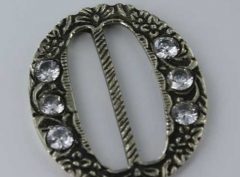 The Oval Gem buckle uses the Lace tension buckle, with any of  the 7 colored CZ that we carry, can be placed in the buckle as show. Available crystal colors: Emerald, Garnet, Topaz, Sapphire, Amethyst, Aqua, Peridot, Tanzanite, Rose, Ruby or Aura Borealis. Buckle with 6 CZ, color of your choice $ 30.00 pair 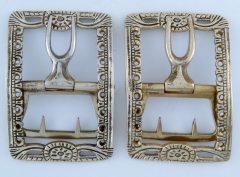 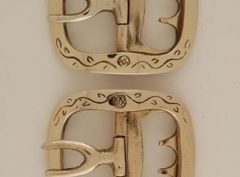 Vine and Leaf :  Is a delicate line engraving of a vine with leaves, Brass Buckle.  All buckles are sold in pairs.  If you need just one for a special project, let us know. 800 605 8280