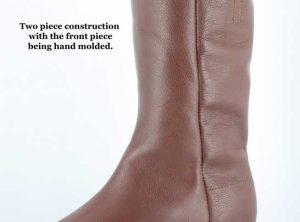 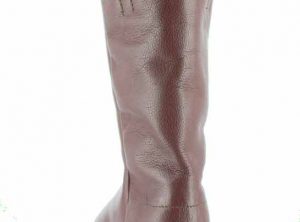 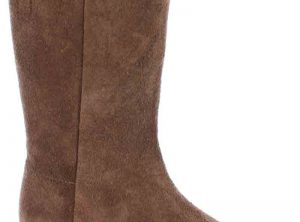 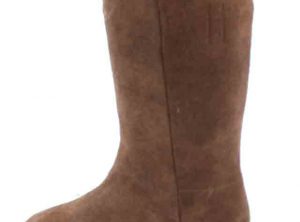 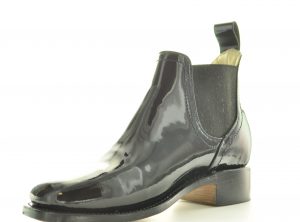 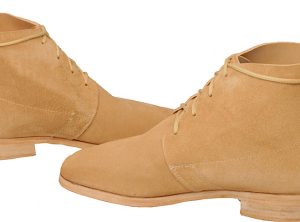 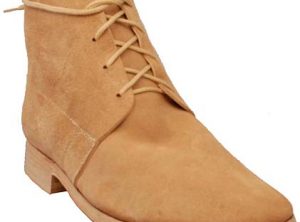 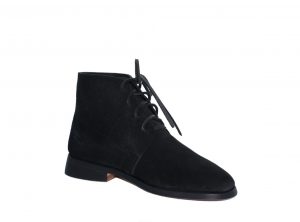 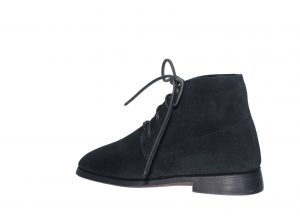 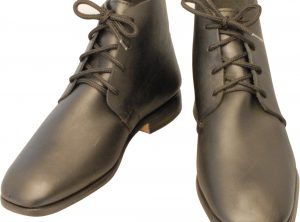 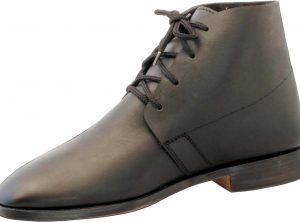 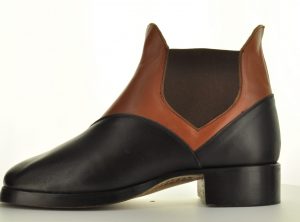 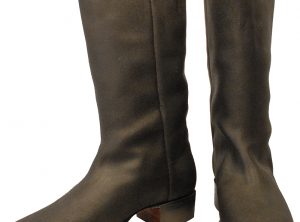 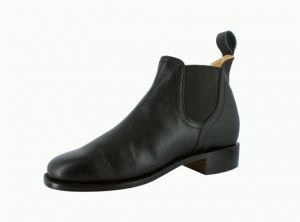 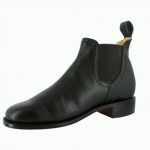 Civil War Artillery Boots Sometimes called Ankle Boots. See Uniform Regs 1851/1861. Also see: Dress regulations throughout the period … mention only the “ankle boot” and the “Jefferson boot.” Both types were prescribed for officers and the mounted service….It can be concluded that the ankle boot was a medium height riding boot without lacing and otherwise called a ‘half boot..’ “Since the mounted man’s boot (if he wore such instead of bootees) were, by regulation, covered by his trousers………they must have been of the Wellington pattern.”
From: American Military Equipage 1851-1872 The Company of Military Historians-Providence, R.I……
These fine boots are made to Fugawee’s specifications by one of the few bootmakers in the world that still produces the antique molded front piece. I don’t think that any other two-piece CW boot made in America has an accurate molded shape. Without it, the boots tend to wrinkle in the front and cause blisters on the instep.
We sent the master bootmaker an actual, unworn original model 1859 Ankle Boot made in 1865. In that year it was placed on a mannequin of the Drummer Boy of Shiloh and so was preserved in a museum exhibit until 1968. Our boot maker copied it exactly. Look at the original on the right in the picture and the Fugawee model on the left.
We made two changes. We bought the originals when the museum broke up. They were machine pegged, nine pegs to the inch. We used stitching because we haven’t found a machine and no craftsman today can duplicate the work of a 1860s pegging machine. For your comfort, we lined the boot with leather from top to toe. Sizes from 7ee through 15ee.
We have been producing this boot for six or seven years. The other day we received a letter in which Mr. R. Midkim complained that our boots are not “authentic” because they have no welt in the side seams. We have sold thousands of pairs of the Artillery Boot and this is the second time that we have had this complaint. Or maybe it was one man complaining two times. Be advised that we have no side-seam welts. Today’s sewing machines don’t rely on them the way that 1865 chain-stitch machines did.
Members of World War One groups are buying this boot for German and Austrian impressions.
Note: Many re-enactors have been influenced by the Cinema and television and think that the issued Civil War cavalry boot came to the knee with a flap or knee guard in the front. We have plenty of antique photos of CW cavalry with their trousers worn outside the Ankle Boot as per regulations. Both sides dressed this way but some officers bought their own flamboyant Jeb Stuart type of Cavalier boots. No, we don’t plan on carrying them.
In or out? Up or down? What’s that little flap on the front of the boot? The flap or rise is to keep your pants cuffs out of the manure. When you are going to stables or when the wheels of the Parrot gun churn up a muddy slop, you raise the front of your trouser leg and place it behind the flap. About 1870 the flap became more pointed.
It’s the same principle as the modern cowboy boot with its front and back notches to hold the bottoms of your pants out of the mud and manure in the corral.

By the way, only forty percent of the shoes or boots issued during the entire Civil War were pegged. Pegs didn’t meet military specs and bootees made with pegs were purchased from the contractors for about seventy cents a pair less ($1.95 versus $1.25) than sewed boots or booties. Read Colonel Crossman’s letter of 1861.
The leather in our boot is a semi-rough cowhide especially selected by the master bootmaker after studying our original boot. The finish will take a shine after a few polishings or it will take Lexol for a “field-worn” look. The boot is lined with calfskin from top to toe. It has a sewn sole with a roundish shank pegged into place, the only place where we use pegs. This boot has a comfortable square toe, a tight-gripping heel, and bedroom slipper comfort.
This book covers an amazing time period. It is ideal for many impressions from just after 1800 through 1900 and beyond. It is suitable for reunions of the Grand Army of the Republic, the 1800s miner, teamster, cattleman, farmer, Indian Wars, Cowboy Shootist, etc.. I have seen mail order catalogs printed in the 1890s that show a wide assortment of prices and qualities in styles just like the 1871 model