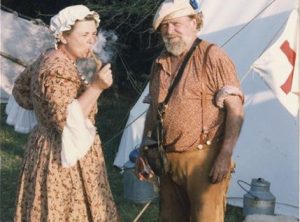 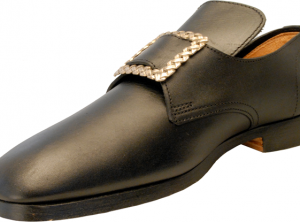 Leslie is the Fob shoe for court. It is an all black smooth leather shoe with 1-3/4″ stacked leather heel.  If you have been to court, we can coat your heels in a bright red as was the way to show that you have been received by the King. This is the same pattern as the ladies’ Debbie, but in men’s sizes. Good with a buckle or large early century bow.  Full and half sizes 8-13 widths D & EE

All of our shoes are functional copies of shoes of the American Colonial Period.  They are designed to be worn with genuine shoe buckles, not the tie-on imitations seen at so many Scottish events.

Never swap shoes. That is a myth with but a faint foundation in history.

Toe caps, the formed section at the front of the shoe, didn’t come into use until about 1870. When you buy a Colonial shoe, expect soft toes and expect to need your shoes a little longer if you have prominent big toes.

What’s the story on straight-lasted shoes?

During the Middle Ages shoes were soft, made something like hard-soled moccasins and had little, if any, heel. They were easily made to fit each foot. Then came the. Italians. Some people even blame Leonardo DaVinci.

High-heeled shoes are mentioned as early as 1533 but they reached ordinary fops in the 1590’s when they swept into Venice and Florence.  This brought out a whole new set of problems.  The shank in the arch of the shoe had to be strong and stiff enough to keep the shoe from collapsing forward and the sides of the shoe had to be molded so that the foot would not slide down  into the toe area.  The complexities and cost of carving compound curves into the last (the form that the shoe is molded over) and then making a mirror image for the other foot limited such shoes to the very rich.

The fashionably foppish folk were faced with a dilemma:  Style or Comfort?

You guessed it.  Style won out, so from the 1590’s until the 1830’s ordinary people wore straight last shoes. Then, in 1828 a foreman named Blanchard at the Springfield Armory in Massachusetts  developed a duplicating lathe for the manufacture of gun stocks.

The original Blanchard lathe is on exhibit in the Springfield Armory museum. Despite the Armory’s history of service since the birth of the Republic,  it is gone. An industrial park and/or Junior College now occupy the buildings. A small but fascinating museum of American arms making since the birth of the republic is set up in one of the old buildings.  The museum is  closed Monday and Tuesday. When asking directions from the local people, ask for the Junior College. Most of them don’t know how those old buildings won this nation’s wars.

A Philadelphia shoemaker thought that Blanchard’s new lathe was also ideal for making shoe lasts and  soon discovered that, by reversing the cam which guided the cutter, a mirror image could be produced.   Since a wooden last gets chewed up by tack holes in  a few hundred uses, there was a constant demand for new lasts and the new lasts soon were all made in left and right.   By 1841 the military was using left/right shoes. By 1851 left/rights were officially specified.

Some slippers and light women’s shoes continued to be made on straight lasts by the turn-shoe method until perhaps 1880. This probably is because the lasts were usable for a longer period since they did not suffer all the tack holes used in welt construction.

(By the way; Napoleon’s valet broke in his boss’s custom-made boots. It’s good to be the Emperor.)

So back to your choices in a man’s Colonial shoe.

The left/right Franklin is made of black calfskin.  It has a normal heel and is leather lined. The toe is slightly squared but not square enough to limit the style to pre-1735.  With a longish tongue, the Franklin is a good choice for the gentleman of means. To get a little snobbish, paint your heels red with paint.  Originally, that meant that you had been received at Court but it was widely imitated by all kinds of fops and pretenders. See the film “Rob Roy”. The latchets will accept a 1¼ to 1½ inch buckle. Sizes 7 to 13 in E width only.