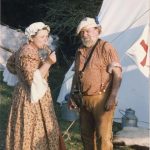 Fugawee Corp was started officially in 1986 By Art and Nancy Ayotte, to bring historically accurate footwear to Re-enactors. Art was retiring after more than 40 years at sea having been all over the world, seen all kinds of things. He always had black powder guns and knew a good connection for shoes.  Nancy being a Jeweler by trade, started the collection of buttons and began making Medallions.

It all started with my brother’s old bedroom at my Mom and Dad’s house. Art, before he retired from forty years at sea, had fallen in with a bad group; the American Mountain Men. And from there it was all downhill! He had my mom dress in funny clothes, go “rendezvous-ing” for weeks at a time. The muzzle guns had been around my whole life. I remember hiding behind trees with a string tied to the trigger of a shotgun and giving the string a pull to test a gun with a double load. So I should have known that the black powder would eventually eat up his common sense! Then my father and mother went to Friendship, IN for the NMLR event; when they came back we heard the stories of the shining times they had, the friends they made (monkey business and all??). I think It was there at Friendship when he totally lost his mind and decided to retire and Rendezvous somehow.

Art was still going to sea at that time. He usually sailed as First mate (Captain’s don’t get overtime), he was on a run across the Pacific to Thailand, among other places and back again, every three to four weeks. Thailand was where he had always liked his clothes and shoes made. Art had been going to sea from the time he joined the Navy.  When Pearl Harbor was bombed he was nineteen. He told me the lines were too long at the recruiter’s office the first few weeks; he and three of his friends would start walking at 6: AM, stand in line all day and be turned away because the recruiters were closing for the night. They then walk seven miles back home to Maynard, Massachusetts. Art and his friends did this for a week in December (Massachusetts is cold in December) until he deiced to wait till after Christmas when the lines were shorter.  In January 1943 he joined the United States Navy. And that is how and when Art started going to sea. He studied his Coastguard Mates license exams on the battle bridge of the USS Houston when they weren’t using it.

And for the Johnny whiners out there it was 18 months between port calls.

Art had Nancy, my Mother, sewed up all kinds of Rendezvous outfits including shirts, some knee breeches, waistcoats, petticoats, camisole and aprons.  As they went to more events updated their clothing to become more accurate. It became obvious that the shoes which were offered were not correct or comfortable.  Most people relied on moccasins. Art had a brainstorm, he had had shoes made in Thailand at the Florida Shop and was pleased with the product. And this was an interesting part!  The ship’s engineer had just retired and lived in Thailand with a Thai wife. Art and Nancy did the research for the style of shoes for this period and sent sketches to his friend Ernie Moneymaker.  Ernie would take them to the Florida shop and have a pair made.  When they arrived, Art saw that changes had to be made if they were to be period correct.  This first pair went on the blanket ( at Rendezvous that means items on the blanket outside your tent were for sale ) they were bought up quickly. After about 5 correction tries and orders for 2 pairs, they got it right.  All trials pairs were whisked off the blanket in minutes after we set them down.   When we were getting 20 pair at a time, we knew we had a business.  Not long after, Ernie said he had to stop as the Thai Gov. did not like whites making money, only nationals.  A Thai intermediate took over.  Problems emerged and Art flies over to see if he could make it work.  Art spoke 7 languages but not Thai or Korean; so he knew a Korean who understood Japanese.  He spoke Japanese to the Korean who then translated it to the Thai shoemaker. This was a daunting task. (This could take a while).  Unfortunately, after Art got back home we realized that the Thai side would not work much longer.

The orders were growing larger, getting to be 20 40 pair of shoes at a time. We started looking in the United States for shoe manufactures. We contacted about 11 manufactures in the Northeast United States, no joy, we were too small a company. One day I asked my father why he didn’t go to Mexico for boots and shoes instead of halfway around the world? Piss leather was the first concern (uric acid tanning) is cheap and was OK as long as you were in the desert!!. Art had been speaking Spanish for forty years and was fluent in several dialects (his days sailing master in the Caribbean).

So off we went on a great adventure to Mexico in our blue Dodge van! It took about two weeks to find a good shoe town and longer to find a good manufacturer. The first thing we wanted to know was about the leather, so we went to a tannery. There were twenty pages in the phone book of tanneries!. They were using BASF chemicals and brand new Italian tanning equipment. A far cry from a scudding knife and log with small children doing the work and a guard standing in the corner. Top shelf German chemicals and 90% of the shoes we saw were going to Europe, Italy, and Germany mostly. We saw “Hush puppies”, Bali’s, Tom McCann and much more recognizable brands. So this was good enough for Florsheim it should be able to live up to Fugawee standards.

As the years went on I stopped brain tanning, left the family business and, went back in to the technical/computer world in which I was trained. I had to stop Rendezvousing all the time and could only go to Alafia. It was better after Jerksville was outlawed.  The long beards were dropping like flies. Then one Saturday it happened to us-Art, my father, passed away on a sunny July morning and our world came to a crashing halt. Nancy (my mom) had the whole thing dumped on her.  After losing her husband of forty-nine years she decided to continue on with the business.  Mind you she is a sharp businesswoman and has broadened the horizon for Fugawee.  I was working in computers at the time, quit my job and joined Fugawee full time again. Bringing my knowledge of computers with me, I have further enhanced the website to include shopping carts (unheard of in the rendezvous world!), thereby allowing and increasing the styles and comfort of footwear (I have been working and growing with Fugawee ever since. We now just finished building an 8500 square foot warehouse and are moving out of the second Fugawee location of 2300 square feet. This is an exciting adventure and we look forward to hearing from you.